Australia makes the world top seven at the Coupe du Monde de la Patisserie in Lyon and joins the elite group of countries that are automatically selected for the World Cup 2015!

Team Coach, Dean Gibson said "It was always the goal for the team to make the top seven and we are treating this as a win. It's a real achievement to beat some serious countries including Belgium, UK,Taiwan as well as the other 14 countries".

Congratulations to the World Top 7 Countries: 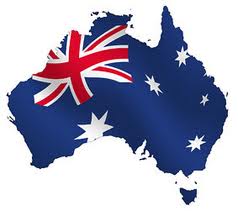 Currently in Lyon, Team Pastry Australia are busy stirring, melting, baking, freezing and creating. Their stunning showpieces in chocolate, ice and sugar are nearing completion and their wonderfully intricate sweet masterpieces - a chocolate entremet, ice-cream cake and plated dessert are almost ready for the judges to taste.


To view their recipes and see a video of them hard at work practising in the lead up to this world event, please click on the link below... 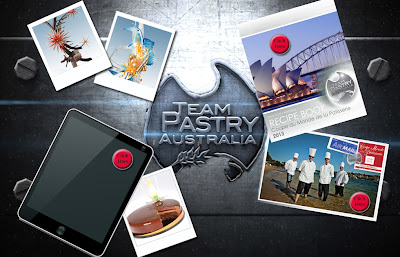 Australia's top pastry chefs to compete in Pastry World Cup... read the article below or have a look via Hospitality Magazine online... 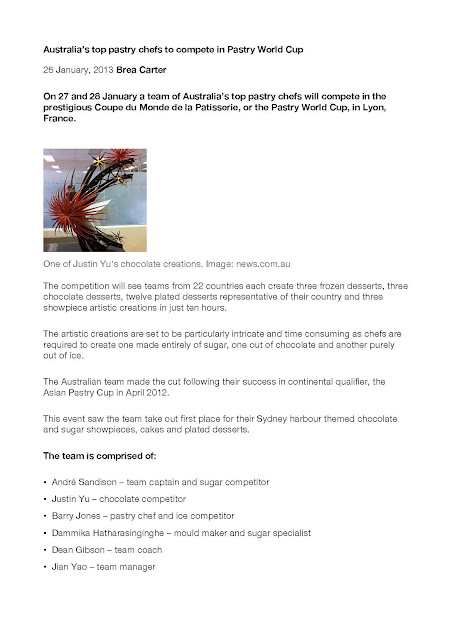 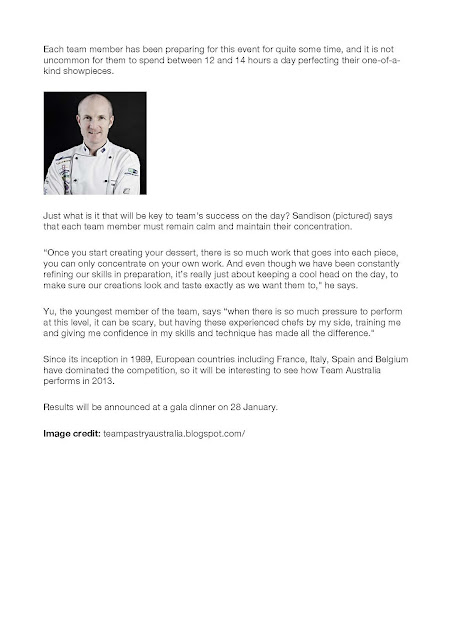 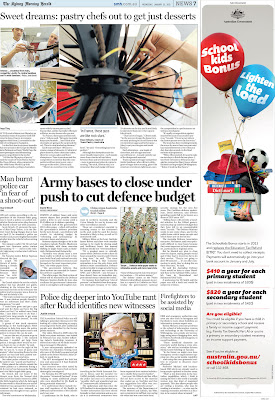 As the team flew out for Lyon, Sydney Morning Herald were kind enough to cover some of their story in this  pictorial editorial by Inga Ting.

AT THE crack of dawn next Monday, an Australian team of six pastry chefs will travel to Lyon,France, to compete against chefs from 22 countries for the title of world pastry champion.
It is the first time in six years Australia has sent a team to the Coupe du Monde de la Patisserie or Pastry World Cup, the most prestigious and demanding pastry competition in the world.
‘‘It’s like the Olympics of pastry,’’ said the coach of Team Pastry Australia, Dean Gibson,who competed in
the 1999 Pastry World Cup with Adriano Zumbo, perhaps Australia’s most widely-known pastry chef.
Except that, unlike Australia’s Olympic athletes, no one knows who you are.
‘‘In France, those guys are like rock stars,’’Gibson said. ‘‘Being in Australia keeps you humble . . . but I think a lot of people are going to be surprised [by us]. There’s a real underdog element.’’
Each team will have 10 hours to create a range of desserts: 12 identical plate desserts, three chocolate cakes, three ice-cream cakes and three showpieces. Time is precious and the competition so intense that the competitors will not stop to rest, eat or even go to the toilet,Gibson said.
‘‘There’s no room for error at this level,’’ he said. ‘‘Everything has to be perfect.’’
Although the showpieces are the most visually impressive – each stands more than a metre tall and takes
between four and seven hours to build – taste is paramount when it comes to scoring. The trick,Gibson said, is to remember that each judge will taste 33 desserts on the day and is not likely to take more than one or two spoonfuls of each.
‘‘That’s a lot of sugar,’’Gibson said.
‘‘So the way we design the desserts is not only packing in a lot of flavour but we minimise sugar and fat because . . .[they] coat your tongue and mask flavour.’’
Each showpiece – one made of chocolate, one of sugar and one carved from ice – is made entirely out
of the designated material.
Team captain and sugar competitor Andre Sandison, who will turn a kilogram of sugar into a soaring, glass-like structure over about eight hours, says the competition is a performance as well as a mind game.
‘‘It’s really a competition against yourself because it’s a creative process,’’ he said. ‘‘It’s not a race where
the fastest person over the line wins.’’
The team has been working towards the event for more than two years and has trained between 12 to 14 hours a day, four days a week, in the final months of preparation.
‘‘When I first started, [it] used to take me two days to finish the one piece. I was there 12 hours to 16 hours a day,’’said ice competitor Barry Jones, whose finished carving weighs 200 kilograms.
‘‘Today, it took me four hours.’’

"Award-winning Pastry Chef, Dean Gibson, explains why Kitchenaid is the workhorse chefs just cant do without..."

Our very own Dean Gibson interviewed by Ruth Devine for Peter McInnes magazine. 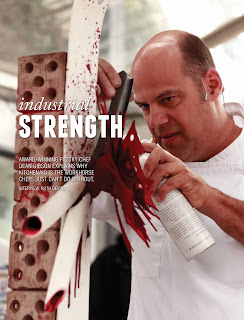 We are pleased to announce two new Gold sponsors for the team... Futura Group and Escoffier!

Futura Group specialise in developing high quality resources and products to facilitate and enhance the learning process. Innovative multimedia integration throughout their learning resources coupled with strong backgrounds in hospitality, education and vocational training, allow Futura to captivate and motivate learners, support teachers and training supervisors both inside and outside of the classroom. 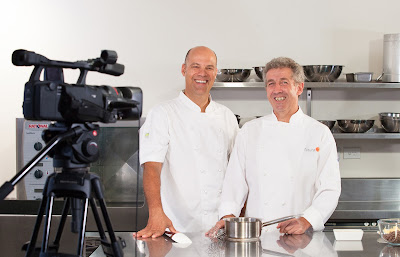 Escoffier “Escoffier” is a name known the world over as The Master (Le Maitre) and is the source for many of the cooking methods and the brigade system used in professional kitchens today. For expert chefs everywhere, the name Auguste Escoffier is synonymous with excellence, quality, commitment, and skill in the culinary profession. The Escoffier Online International Culinary Academy makes it possible to turn your passion for cooking into a career you'll love, with their online program offering a self-paced curriculum that is focused on professional culinary training.


Thank you to Futura Group and Escoffier - we look forward to having you on board for Lyon!


Originally from North Ryde, Sydney, Richard's dream was always to go to France to learn all the techniques. Richard currently works as a teacher at ENSP (Ecole Nationale Supérieure de la Pâtisserie) looking after their international programs. Richard specialises in Entremets and continues training alongside his teaching.

Some of Richard's work ::

Email ThisBlogThis!Share to TwitterShare to FacebookShare to Pinterest
Older Posts Home
Subscribe to: Posts (Atom)
We're Team Pastry Australia and we're on our way to Lyon to compete in the Coupe du Monde de la Patisserie 2013, having now been victorious at the Asian Pastry Cup. Follow our adventures as we train, practice and compete all the way to France. 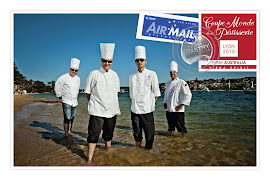